So I got my niece, Rachel's name for the family gift exchange.  For the last few years I've been making kitchen tools, but she had one or two, so she said artwork would be fine.  I've been wanting to try a large pierced item so this seemed like the perfect opportunity. 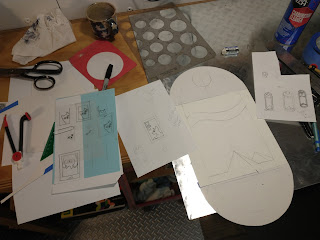 This is the start of the piece.  I looked at and some old drawings and did a few new ones and arrived at the bigger drawing above. It's very much based upon some Egyptian imagery pendants I've done.  At school I've had students doing projects based upon Egyptian imagery.  Here's the current assignment.  I always tell my students there has never been a time in human history that Egyptian imagery has not been fascinating to most people, it has eternal appeal. 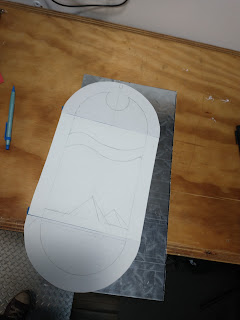 I glued the drawing(about 8" x 12") down to the aluminum diamond plate and then went and trimmed off the corners on the bandsaw down stairs. 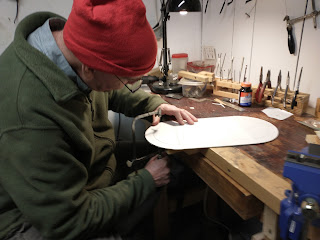 This is pretty much the process.  Drill some holes and feed the saw blade through and saw to the lines.  Probably took about 3-4 hours of work. If I worked straight through, but I took a break for coffee, most likely, and read a bit.  Plus I'm 'kinda lazy.  I broke a lot of blades.  I might have been able to do some more of the cutting downstairs, but it was cold out and I have a good stereo in the studio, Miles Davis that day, mostly.  And I really don't mind sitting at the bench and cutting, it's a pretty comfy place to be. 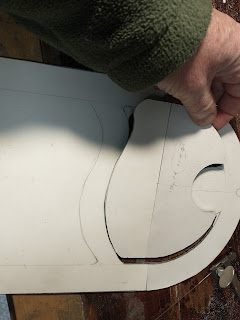 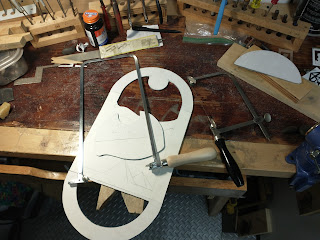 You can see the large throat, jewelers saw above.  It was good idea but far too wiggley to use.  The saw frame was too weak to really hold the blades as tight as I need, hence, I broke more blades than I should. I also needed to have a more coarse blade, but all only had some iffy quality, #1s, which were 'kinda frustrating.  The aluminum cuts nice though, albeit a bit gummy, compared to other metals, but files nice and quick.   I GOT A NEW SAW, DETAILS ARE BELOW! 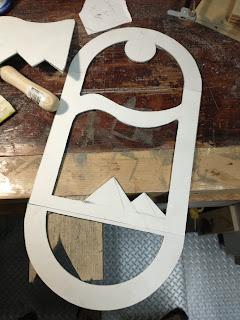 Here you can see the all the metal cut out and removed and the paper still glued on.  I just used contact adhesive for such a big drawing, just to make sure it did not come up when I was sawing. 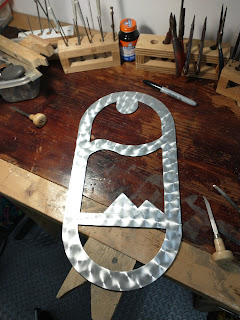 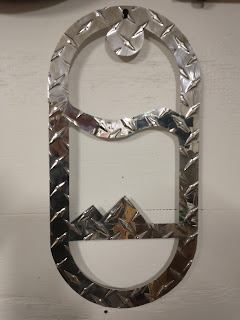 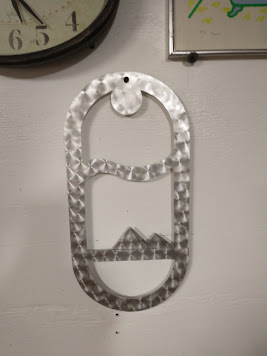 Above is some steps in the process and a pic of the almost done work. The other side is a high shine.   It's hard to see the lines engraved from the photo.  I need to go fix that up.  The texture I used is usually something I use on the back of small pieces, but the aluminum was scrap and it had some gouges and deep scratches, so a texture seemed like a good idea.  I tried a couple of different textures before just going for this.  Next big piece is going to have a sanded in one direction texture.
___________________________
Below are some ones I'm working on currently. The cat one with the earring is in a local art show right now.  I rough cut some lines with a Bosch jigsaw then go at it with a jeweler's saw.  I got got various jeweler's saws and recently found this one, one with a 12" throat, 'kinda unwieldy and ponderous in use, but it's made larger designs possible. 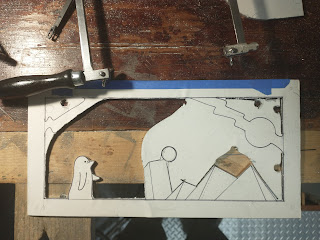 The one above is 0.125(1/8") aluminum sheet.  It's the thickest I've every cut with a jewelers saw. I think I'm using some number 6 blades.   It was slow going, but not all that bad to cut. I'm going to try to set it on top of a piece of really thick titanium, after I've flame colored the titanium. It's about 6" by 12" 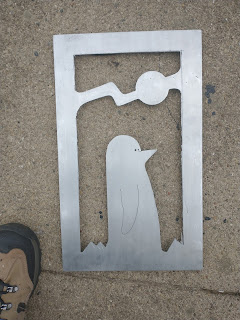 The cutting is roughed in right now and is awaiting filing and some finishing. I'm going to try raising the penguin's wing and tucking in a folder piece of copper or some thin metal so it looks like he's carrying a book or newspaper. 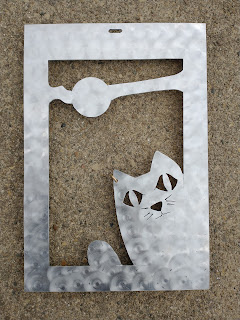 This is a finished one. I made some black, wood clips to hold the piece away from the wall.  You can't really see the earring in gold in this pic very well, but it looks nice, I'm happy with it so far.